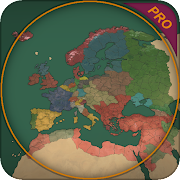 The paid version — it is primarily just a way to support the project.

By purchasing the paid version of the game you get:
- New map and scenarios
- New countries.
- New ages.
- Permanent arcade mode.
- The ADs are disabled.

(At the bottom of the description there are 3 important notes)

Our Empire — it is a turn-based strategy game that has:

• Various maps.
• Various eras and scenarios.
• Diplomacy.
• A simple technology tree.
• Various types of troops.
• Buildings and economy.
• Map and scenario editor.
• Ability to create and save your own scenarios.

• A simple editor of the appearance and the interface of the game.

• Without donation in the game.
• Voluntary advertising.

• Arcade/sandbox mode.
(This mode can be unlocked by watching 4-6 ad videos. Or it is already available in the paid version of the game)

Note 2:
The AI ​​for diplomacy is not fully done yet, I did not manage to make it smart enough. In the future, I plan to involve a third-party game designer who will do the work on the AI.

Note 3:
Our Empire — it's the unofficial mix between my previous games: "Conqueror of the world" and "World conquest: Europe 1812".

The games are no longer owned by SK Games, but you can find them on the google play and support the new developer which is already working on the new update.